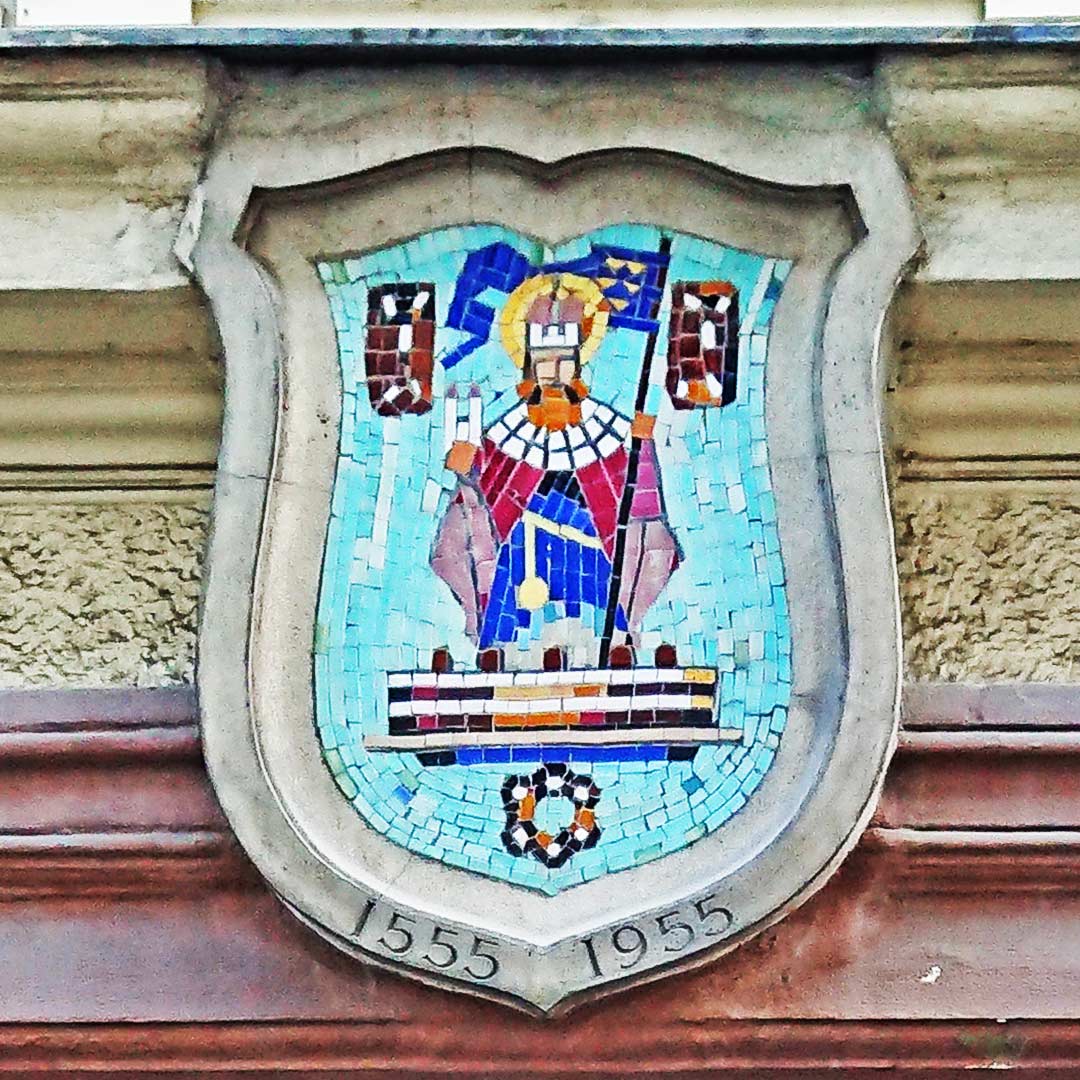 The Crest of the Confectioners Guild

“The crest of the “sugar bakers, cake bakers and gingerbread bakers (chocolate makers)” shows a cake on a blue dish with a golden rim, behind which stands the Viennese confectioners’ patron St. Leopold, who is surrounded by two “Lebzelten” (gingerbread). Underneath the dish is a chocolate star. All products are shown in their natural colours.

Sugar or products refined with sugar were a rarity, and rarities often awarded certain healing properties. That’s the reason why sugar was initially sold in pharmacies and was only accessible to the rich. The elitist character of sugar also didn’t change later, when confectioners started to use it more creatively.

The multiethnic state of Austria as a melting pot of different immigrants is also reflected in the sugar industry. Already in the 14th century, the luxury bakers (the precursors of the confectioners) mainly consisted of Italien bakers. The actual sugar bakers (confectioners), whose creations originally consisted of sugar exclusively, are said to have come to Austria from the Netherlands during the 16th century.

The trade of the sugar bakers – with their guild from 1744 – had always been a difficult one. First the flour they needed for the craft was held back by the bakers’ guild, and until the 19th century, the cost of imported cane sugar made confectionaries a luxury good. Whoever could afford this expensive luxury had their own staff to manufacture it. The rest of the populace still used honey as a sweetener and were self-sufficient in that regard, leaving very little business for the sugar bakers.

An important expansion of the confectioners’ repertoire (besides frozen goods and liqueur) proved to be chocolate. Here, too, it was sugar that made it enjoyable. When cocoa beans were first brought to Austria from Mexico by the Spaniards it was labelled “pig food”. Even though chocolatiers existed in Austria from the mid 18th century, the confectionary shops started to use chocolate much later.

The democratization of this sweet temper took place only when the sugar beet made the sugar much more affordable. The confectioners hardly profited from it due to the overpowering competition of private households, arrival of factories, and last but not least, the “imperative to stay slim”.

Not until Espresso machines made their way into confectionery shops, and turned them into Confectioner-Cafés, were the sugar bakers able to enjoy an easier life. They could offer something that was previously reserved for the coffee houses.

This site uses cookies. By continuing to browse the site, you are agreeing to our use of cookies.

We may request cookies to be set on your device. We use cookies to let us know when you visit our websites, how you interact with us, to enrich your user experience, and to customize your relationship with our website.

Click on the different category headings to find out more. You can also change some of your preferences. Note that blocking some types of cookies may impact your experience on our websites and the services we are able to offer.

These cookies are strictly necessary to provide you with services available through our website and to use some of its features.

Because these cookies are strictly necessary to deliver the website, refuseing them will have impact how our site functions. You always can block or delete cookies by changing your browser settings and force blocking all cookies on this website. But this will always prompt you to accept/refuse cookies when revisiting our site.

We fully respect if you want to refuse cookies but to avoid asking you again and again kindly allow us to store a cookie for that. You are free to opt out any time or opt in for other cookies to get a better experience. If you refuse cookies we will remove all set cookies in our domain.

We provide you with a list of stored cookies on your computer in our domain so you can check what we stored. Due to security reasons we are not able to show or modify cookies from other domains. You can check these in your browser security settings.

We also use different external services like Google Webfonts, Google Maps, and external Video providers. Since these providers may collect personal data like your IP address we allow you to block them here. Please be aware that this might heavily reduce the functionality and appearance of our site. Changes will take effect once you reload the page.